One of the most frequent ideas emerging in loyalty marketing strategies in recent years is the concept that “loyalty” is an emotion that arises as the result of people connecting to each other in ways that matter. While that often includes a structured programme between brands and their customers, it also increasingly includes concepts that are designed to extend beyond simply tracking transactions to truly connecting to a more purpose-led brand identity, in order to create an emotional bond between those brands and their customers.

This is very clearly the idea behind some recent tactical campaigns in the US market for the McCafé brand, which initially announced its ten year anniversary with a new visual identity for its coffee products. From its original style inspired by the dark product palette of coffee beans, the new coffee brand identity features “golden cups that match our gold standard for quality coffee” that “embraces optimism” – signalling a clear intention to connect with customers on a more human level. 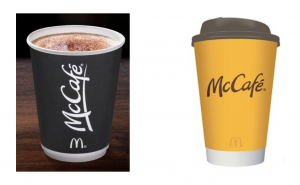 Before and After – the McCafé Brand Identity in the US is updated for their ten year milestone.

A Focus on Goodness

As well as the visual change, this new consumer-focused mindset is evident in the US press release which used emotive language such as “because good people deserve good coffee.” Previously, coffee campaigns such as this amusing one in the UK market were focused on the importance of easily enjoying your every day coffee by choosing McCafé, however the US team has clearly noticed the huge surge in demand from customers for brands with greater purpose and positivity.

By way of background, we’ve seen plenty of rumours in the past few years that McDonald’s is planning to launch a full loyalty and rewards programme for all of their restaurant products in both the US and UK, however to date, their marketing team has focused exclusively on the concept of McCafé Rewards – an extremely generous “buy five, get one free” (20% reward rate) proposition for customers in the US.

Even more interestingly, with an existing “on cup” sticker-based programme running for many years as a more traditional approach to rewarding McCafé customers, McDonald’s officially confirmed that both tracking options are continuing to operate in parallel, explicitly allowing (even perhaps encouraging) customers to “double-dip” on coffee rewards!

From an overall customer perspective, McDonald’s US and UK apps support the tracking and redemption of your McCafé purchases, product offers and coupons as well as mobile ordering and payment for the main restaurant, however tracking and rewarding purchases for the entire menu has still not been launched at the time of writing, either using traditional loyalty cards or their digital platform. 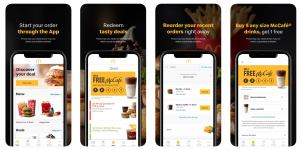 McDonald’s app is supports offers and coupons, mobile ordering and payment as well as McCafe Rewards.

Alongside the ongoing McCafé Rewards concept, this summer McDonald’s took a very different approach to building customer loyalty in the USA which again focused on its coffee business rather than its main burger-based restaurant business.

In keeping with the consumer sentiment and context discussed above, the brand launched a tactical campaign called “pay it forward” in August 2019. It launched with a tiny marketing investment (from a product perspective) and used the simplest possible card based solution. A total of 500 cards with (presumably) unlimited cups of free coffee were distributed at random, valid for a total of three days to claim a free small coffee for anyone lucky enough to receive one, and then “pay it forward”  by passing the card to a friend or stranger they wanted to reward.

While the results of the campaign are not public, the card volume does seem like a drop in the ocean compared to the 822 million cups of coffee the brand sold in 2018 alone, and yet, like all of the best ideas, the media loved both the simplicity and humanity that this tactical campaign demonstrated, with coverage on many of the country’s high profile channels such as USA Today,

The video below shows how easy the concept was, yet with the obvious dependency on being lucky enough to be given a McCafé gift card, the campaign feels more like a brand campaign to drive loyalty than anything else. The spokesperson for the brand, Elina Veksler, confirmed that the brand is “staking a claim in goodness” using a new tagline “Good is Brewing”.

If we ever needed proof that loyalty is an emotional connection, not just a transaction, this campaign from one of the world’s most valuable brands is clear evidence and shows a compelling approach that many can learn from. The obvious next step seems to be a similar concept delivered digitally, with all of the extra benefits that would facilitate. From fraud management, to improving the campaign’s accessibility, as well as the obvious gains around the loyalty insights and identifying and segmenting their most engaged customers, it will be fascinating to watch McDonald’s as it follows this latest approach to loyalty. One thing is clear that they now truly understand – loyalty is about people, not about products.

With over twenty-five years marketing experience, I specialise in loyalty marketing consulting, managing consumer loyalty propositions, strategy and operations. In addition to working with Liquid Barcodes, my clients have included Telefonica O2, Three Mobile, Electric Ireland, Allied Irish Bank and The Entertainer Group, as well as Avios – the global points currency for some of the world’s top airlines. I am also a judge for the Loyalty Magazine Awards.