China as a nation was once primarily known as a country simply producing cheap imitation and counterfeit products in an attempt to mimic the prosperity of western economies. But in less than a decade it has transformed its approach, becoming a global technology leader and the number one nation in the world in terms of investment in digital technologies. The results have been nothing short of sensational, catapulting China to become the second most valuable nation brand in the world, with Chinese companies now making up 50 of the Global 500 most valuable brands.

Their approach has transformed every aspect of life in China, so we wanted to understand how they have leveraged their extra-ordinary digital eco-system to drive consumer loyalty, and uncover what ideas are working with Chinese consumers that we can learn from and share with you. We particularly wanted to understand the impact of this digital-first economy on the convenience industry and whether Chinese eCommerce giants are threatening the need for convenience stores in everyday life.

The short answer is a resounding no. In fact, the industry was recently described by visiting Harvard Business School Professor Mr. Ananth Raman as enjoying unprecedented vitality.

We know that Jack Ma the founder of the Alibaba Group has repeatedly introduced the idea of “new retail” which blurs the lines between online and offline, however we’ve also witnessed internet-style companies like Luckin’ Coffee disrupting brands like Starbucks and enticing consumers to choose to have their coffee delivered instead of collecting it from their local store. It’s a radical behaviour change but seems to be growing the overall sector (rather than diluting it) by making coffee easier to enjoy for busy Chinese millennials.

In fact, according to this years China Convenience Development Report by KPMG, convenience stores are actually becoming increasingly popular, with compound annual growth rate of 20%, and now over 120,000 stores. The report details nine key insights and trends being seen with Chinese convenience retailers, including the “active promotion of digital transformation and loyalty programmes”. As discussed below, it includes some interesting case studies and trends driving loyalty in China, some of which we believe will become popular in other global markets.

2017 loyalty research conducted by Mastercard in the Asia Pacific region reported an “unquestionable appetite for loyalty among the burgeoning middle classes” in emerging markets such as China, India and Indonesia, with an average membership of 7.6 loyalty programmes in these markets.

It’s impossible to capture the trends, ideas and insights for this vast region in one article, so today we are focusing on the top three loyalty trends we’re seeing in China. Some are successful strategies that originated in more mature markets, however there are interesting lessons on how Western strategies have been adapted for Chinese consumers, and it will be fascinating to see if any of these Eastern ideas are in the future picked up back in Western mature markets.

When Alibaba, the Chinese eCommerce giant launched its loyalty programme called “88” (which means “double fortune“) in August 2017, there were more contrasts than similarities with the Amazon Prime loyalty programme. Primarily, Amazon Prime charges a simple $99 annual membership fee and offers consistent benefits, led by unlimited fast, free, delivery services. By contrast, Alibaba customers joined for free but earned points and a score, called Taoqizhi, for their shopping and social behaviour and were then categorised in to clear groups – 88 Members, Super 88 Members and Selected 88 Members. The benefits were clearly segmented and became increasingly valuable and emphasised a strategy to move “beyond growth to experiences”.

Yet one year after launch, Alibaba introduced an additional tier as a paid option, inviting members to upgrade and become an “88 VIP” member, and the price point to access the huge range of benefits was ten times more expensive for customers with fewer than 1,000 points at RMB888 ($129.77) but just RMB88 ($12.86) for those with 1,000 membership points. The full press release announcing the launch of the paid subscription programme and its benefits can be read here. No results have yet been published on how many members have paid to join, however there’s no doubt that the scale of Alibaba has created extra-ordinary incentives for millions of members to do exactly that.

Another aspect of this programme that’s critically important to notice is their loyalty brand’s strategy which will be of interest to other brands interested in this market. It is the use of “lucky numbers’ – 8 in particular – whether in branding or even pricing as seen above. This approach is used to a much lesser extent  in Western countries (eg mainly in pricing such as the use of .99 cents) however as a branding tool, it’s critical in Eastern cultures. 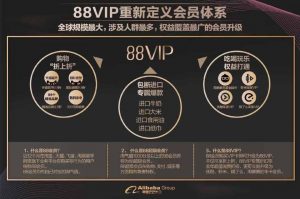 What’s incredibly interesting in the Alibaba strategy – and a strategy that I believe will become increasingly important in global loyalty programmes – is the focus on connecting and contributing to the community. Alibaba has realised the importance of encouraging members to share products on social media, post questions in community forums or write product reviews useful to other consumers and so they earn both points and privileges beyond simply their purchases, behaviours that increase the value of the overall platform to other members of the community and therefore the overall stickiness of the programme.

Jiang Fan is the lead for the loyalty initiative, and he says, “We care about how consumers feel on the platform. We want to bring them more than just goods, but also a better lifestyle.”

This is a fascinating focus on members who are “engaged, credible and consistently active”, providing better experiences and a virtuous circle of valuable connections for “the largest consumer community in the world”. 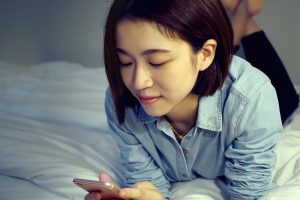 No article about loyalty programmes or digital trends in China would be complete without discussing Wechat – the platform originally launched just eight years ago as a messaging platform. It has since grown to over a billion monthly users and as the video below shows, it has become the single essential platform for brands and consumers to connect.

Its ecosystem has been labelled a “superapp” as its features includes extensive access to Chinese services, with recent research by China Channel quoting that almost half of customers no longer even carry cash.

Whether its to connect loyal customers with brands for marketing, payments, customer service, coupons or simply gifting between family and friends, Wechat has become the default platform to find, support and keep customers, and one we’ll continue to write about in our ongoing articles about digital loyalty platforms and programmes.

No matter what part of the world you are based, there’s no doubt that China is enjoying both the necessary scale and ambition to offer us great ideas and insights as to what truly matters to customers. As one article said so well: “China is no longer simply the factory to the world. It is the world’s fastest-growing consumer market”, so while cultural variations are inevitable, our belief is that human beings are more alike than different, which will ensure that China will continue to give us unique insights and ideas how to drive loyalty with our customers worldwide.