When we think of the world’s top online brands, we typically think of eCommerce and technology giants like Amazon and Apple, however Domino’s, the world’s largest quick service restaurant, also claims to be among the top five eCommerce retailers as a result of the incredible work they are doing to stay exciting and relevant to today’s customers. The company’s global dominance features powerful online capabilities including fifteen different ways to order, and this dynamic approach combined with their popular loyalty programme are together driving incredible success, with 101 consecutive quarters of sales growth recently announced.

Given how critical it is to get the basics right, Domino’s first embraced an honest yet risky strategy in 2009 when admitted it had an inferior tasting product. Their approach was a powerful example of how authenticity can inspire trust, and the “PizzaTurnAround” campaign allowed it to effectively re-invent itself as a “surprisingly honest brand”.

Alongside the product focus, Domino’s launched its online ordering platform over a decade ago in 2008, a strategy credited with creating the foundation for its success and becoming the largest pizza company in the world – a milestone it achieved in February 2018.

With its product and platform in place, the brand’s “deliciously creative” digital marketing initiatives are now playing the lead role in their ongoing dominance. Their Domino’s Rewards programme is a classic example of a clear, consistent and compelling loyalty programme that’s easy to understand and use, and it’s continually enhanced with clever and unexpected tactical ideas that are truly engaging users. Let’s look at how this “online food ordering icon” uses a clear consumer focus and the power of the latest technology to differentiate itself in such a competitive industry. 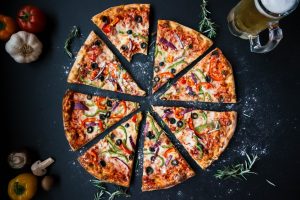 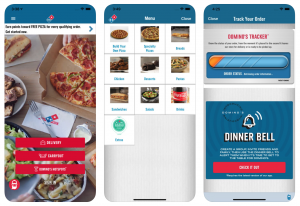 While some of the brand’s campaigns are more PR stunts than anything else, others make great commercial sense. For example, I’m not convinced how compelling the wedding registry option is proving (which allows guests pick pizza as a wedding gift!), but there are some ingenious ideas that we can learn from. Here are my favourites:

Similar to their Rewards programme proposition, users earned 10 points per picture uploaded, with a commitment to awarding 100 million points toward free pizzas and pies during the program’s 12-week duration. While it might not make immediate sense to consumers why they are being rewarded for buying pizza from competitors, for Domino’s these customers were like gold-dust – they shared their data, become engaged app users, and of course have clearly identified themselves as pizza lovers and potential customers for future orders. Another compelling clever concept! Watch the TV campaign below, which aired in early February ahead of the big football final, to see how simple and effective the concept was.

With so many clever and creative concepts, it’s no wonder that Fast Company describe Domino’s as one of the world’s most innovative companies. In 2018, the then CEO Patrick Doyle explained that the company is “as much a tech company as we are a pizza company” with half its 800 employees in its headquarters working in software and analytics!

I’m certainly impressed, and now off to order myself a delicious Domino’s pizza – purely in the name of loyalty research of course!