As the largest economy in the Middle East, and the 18th largest in the world, Saudi Arabia is renowned as “an energy superpower” and the second largest oil producer in the world behind the U.S. As a result of its massive population of young people, and its impressive GDP, Saudi Arabia achieved eleventh position in the most recent Global Retail Development Index which assesses both short term and longer term attractiveness of developing countries for global retailers, and despite its recent challenging economic and political conditions, the country has committed to both cultural and social reform as it seeks to diversify its economy through its Vision 2030 Transformation Programme.

Some of the most surprising insights about this region include that the GCC region has the highest smartphone penetration in the world, and also little known is how the country’s use of social media is achieving record levels. For example Saudi Arabia alone makes up 9% of Snapchat users globally. This incredible adoption and engagement with social media can be attributed predominantly to the population of almost 30 million people, of which almost 70% are under 30 years of age. These young people are digital natives, many are educated abroad and in 2018 Saudi women in particular have started enjoying newfound freedom as they explore their new freedom to drive.

That monumental decision is projected to bring a $90 billion benefit to the Saudi economy, with an expected secondary benefit mentioned by Saudi Energy Minister Khalid Al-Falih who predicted the additional driving population would create an increase in demand for gasoline. As we approach the six month anniversary of that dramatic cultural shift in this complex country, we review some of exciting developments and innovation in the fuel, coffee and convenience markets.

Despite price hikes of 80% in the prices of fuel, regional and international brands see plenty of opportunity for growth in Saudi Arabia.

Full market reports can be bought for a detailed understanding of the market’s potential, however Euromonitor recently said that Saudi consumers increasingly “opt for lower prices and promotions that can only be offered at their local convenience stores”.

Fuel retail players include Tas’helat Marketing Company, Petromin Corporation, Oman Oil Marketing Company, ADNOC Distribution and Emirates National Oil Company (ENOC) – all of which are supplied exclusively by the world’s most profitable company – Saudi Aramco, which operates no gas stations of its own. In the grocery sector, Panda is the number 1 retailer with a 20% share of modern retail or 8% share of the Kingdom’s market overall.

Despite the introduction of VAT in the GCC region for the first time in 2018, its clear that both regional and international brands see immense potential with the youth market in Saudi Arabia, with a host of recent impressive industry announcements including: 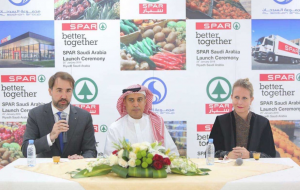 While the three Saudi ‘giga projects’ announced at the 2017 Future Investment Initiative (the city of NEOM, Qiddiya and the Red Sea tourism development project) will take years to realise, innovation in our sector in convenience retail is already in place in the capital city of Riyadh.

We’ve already written about a ‘staffless store’ in Shanghai as part of our focus on retail innovation in Asia  so we were impressed the launch of this innovation in the Saudi market by an eCommerce brand – JollyChic.com –  which has described itself as both a Chinese company and a Middle Eastern brand.  One particular challenge many company’s face is the implementation of solutions in Arabic – the official language of Saudi Arabia which uses a different alphabet and is read the opposite direction to english.

As you can see in the promotional video below, the full customer journey appears frictionless and highly effective for time-starved Saudi’s searching for ultra convenience on the go, with another location in Dubai apparently coming soon.

A number of unique features characterise the coffee shop market in Saudi Arabia: 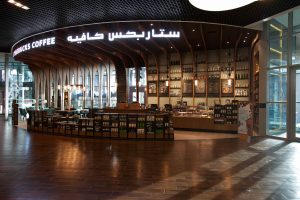 A Starbucks Store in the Middle East.

Like most countries, Saudi Arabia has a unique heritage which needs to be carefully understood and respected for any business to be successful there. It is a powerful nation and its traditional culture has even resulted in the need for global brands to use a localised logo in order to satisfy religious values while appealing to the increasingly vocal young population who delight in many of the same consumer trends as the Western world. Whatever concessions are needed to ensure retail brands appeal in this market, there’s no doubt that their scale and spending power make this country a market to be reckoned with.