As the third-largest coffee shop chain in the UK, Caffè Nero operates significantly fewer stores than UK market leaders Costa Coffee or Starbucks, however it does boast the title of the largest independent coffee house group in Europe with over 750 stores in the UK and a total of over 1,000 stores internationally across 10 countries. And the family-owned firm seems laser focused on continued growth, declaring an expansion strategy that involves opening a “new store somewhere in the world every four days” including the United States, with almost thirty stores now in operation, predominantly in the city of Boston.

With such intense competition and ambition, I was keen to understand its loyalty strategy and how that fits in with these global goals. It seems that having been satisfied for many years with a simple “buy nine, get one free” proposition, the European-style coffee company is now trialling new strategies such as gamification to increase engagement, while simultaneously maintaining a richer reward ratio for customers in order to compete against powerful competitors. The table below shows the market leader Costa rewarding customers with just 5% back, followed by Starbuck’s UK reward at 7%, ensuring value-conscious consumers in the UK will be tempted by Caffè Nero’s relatively-generous 11% reward rate.

The Caffè Nero loyalty programme, like many coffee shops, initially operated a simple paper-based stamp card to track customer purchases. However the opportunity to connect with customers, simplify their payments and gather insightful data was obviously too good to miss. In 2017, the brand finally launched an app, allowing users to pay and collect their loyalty stamps with their phone and avoid the inevitable problem of lost or forgotten cards at the till.

In fact, losing the iconic paper-based stamp cards was a significant problem according a UK loyalty survey which estimated that 25 million people had lost two to five paper loyalty cards in the previous year, and the mechanic was also damaging the brand as UK consumers saw the stamp card as outdated (it was in use since 1997!)  and also cluttered their wallets, so consumer demand for a digital solution was clear.

With operations in ten countries, we noticed some interesting regional variations to the brand’s functionality and loyalty proposition which we think are worth noting: 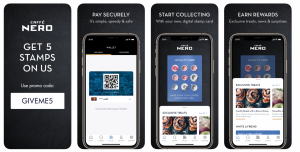 Caffè Nero invites customers to add a payment card to their account for faster payment.

Growing Use of Gamification

While the simple paper-based approach clearly served Caffè Nero well, the brand is increasingly implementing digital games for its customers to drive engagement. For example, in October 2018  the brand announced its first gamified campaign as follows:

The app was clearly meeting customer needs – in its first year, the app was downloaded over half a million times, with customers earning over 1 million free drinks.

Now two years in use, the brand recently announced its latest gamification-based marketing campaign on its loyalty app, launched in time to celebrate its Christmas menu, further enhancing its strategy to entertain and engage customers and with an even longer promotional period:

With over twenty years of consecutive market growth, it’s clear that consumer health and wellness trends in the UK are driving the growth of coffee shops and “displacing the traditional role of pubs”.

Caffè Nero has responded by this year investing heavily in its core product and announcing major menu changes such as stone-baked pizzas which seem to be achieving the delicate balance of tasty, affordable and healthy at under 500 calories, and also fit the European brand positioning perfectly. It’s a clever strategy and reminds me of the great advice from the business guru Stephen Covey – to “keep the main thing the main thing“.

With its menu products continuing to evolve so successfully, it will be exciting to see how the same laser focus drives its digital strategy. Caffè Nero is clearly committed to excellence with its UK app in particular scoring 4.7 out of five in its 8,200 app store ratings, and its increasing use of games is evidence that the brand is excited by the power of its loyalty programme to differentiate in its most competitive market. Commercially, its results are truly excellent too – with 82 consecutive quarters of growth, so Caffè Nero is one company we’ll certainly enjoy watching to see how it continues to delight its loyal customers and shareholders worldwide. 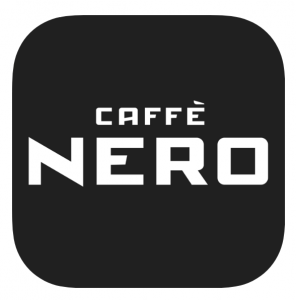