IT´S A MATCH ON TINDER! 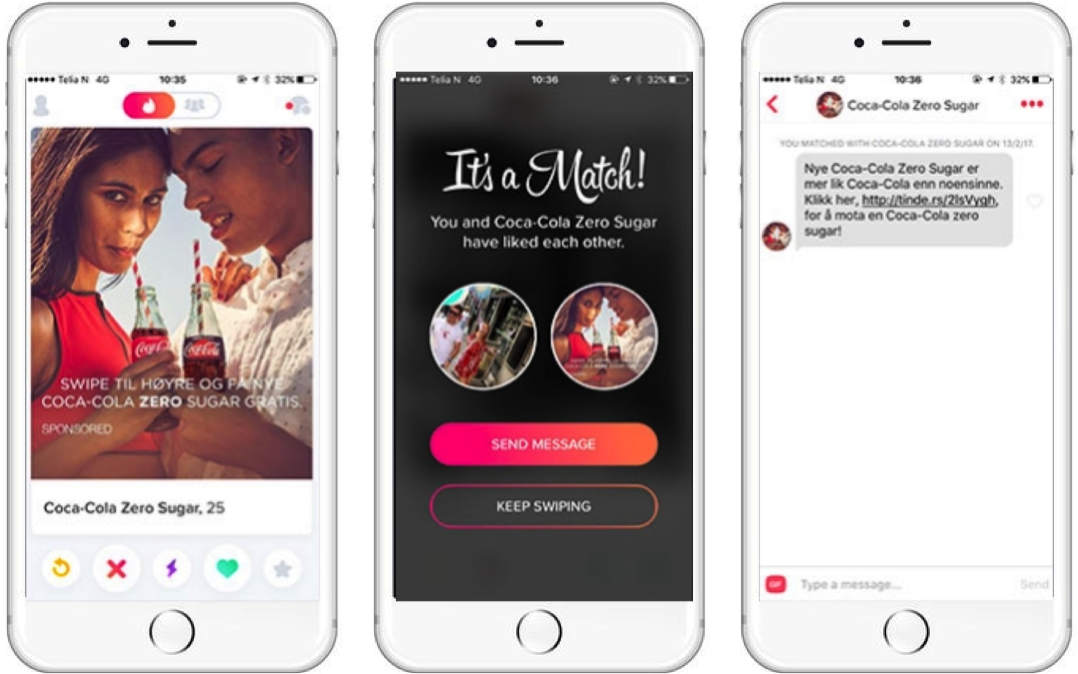 Together with their agencies Carat and Anti, Coca-Cola Company made a branded profile for Coca-Cola Zero Sugar on Tinder. A swipe to the right worked as an opt-in to get more information – and the user got a match with Coca-Cola zero sugar. In their Tinder inbox the consumer was encouraged to click the URL to a landing page where they could enter their mobile number and receive a mobile coupon via SMS. The single-use, unique coupon was for a free Coca-Cola zero sugar to redeem in any Narvesen store. 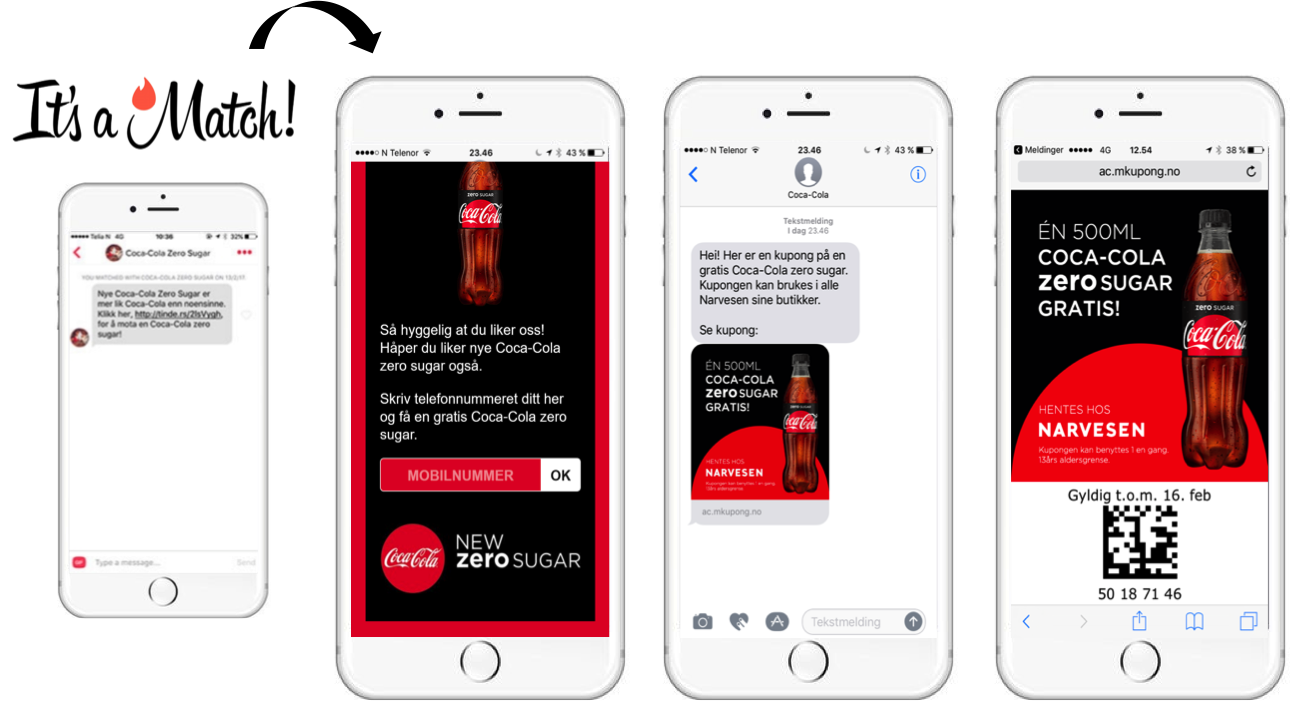 Consumers redeemed their coupon in a Narvesen store close to them. 1 hour after the redemption they got another SMS from Coca-Cola! The SMS text said “We hope you enjoyed new Coca-Cola zero sugar. We are curious to learn what you think of it!”. By clicking on the link the consumer is led to a landing page where they are allowed to make a choice. The black clickable box said “More similar to Coca-Cola than ever! I want one more :)” and the red clickable box said “Not sure. Let me try a Coca-Cola Classic to compare :)”. 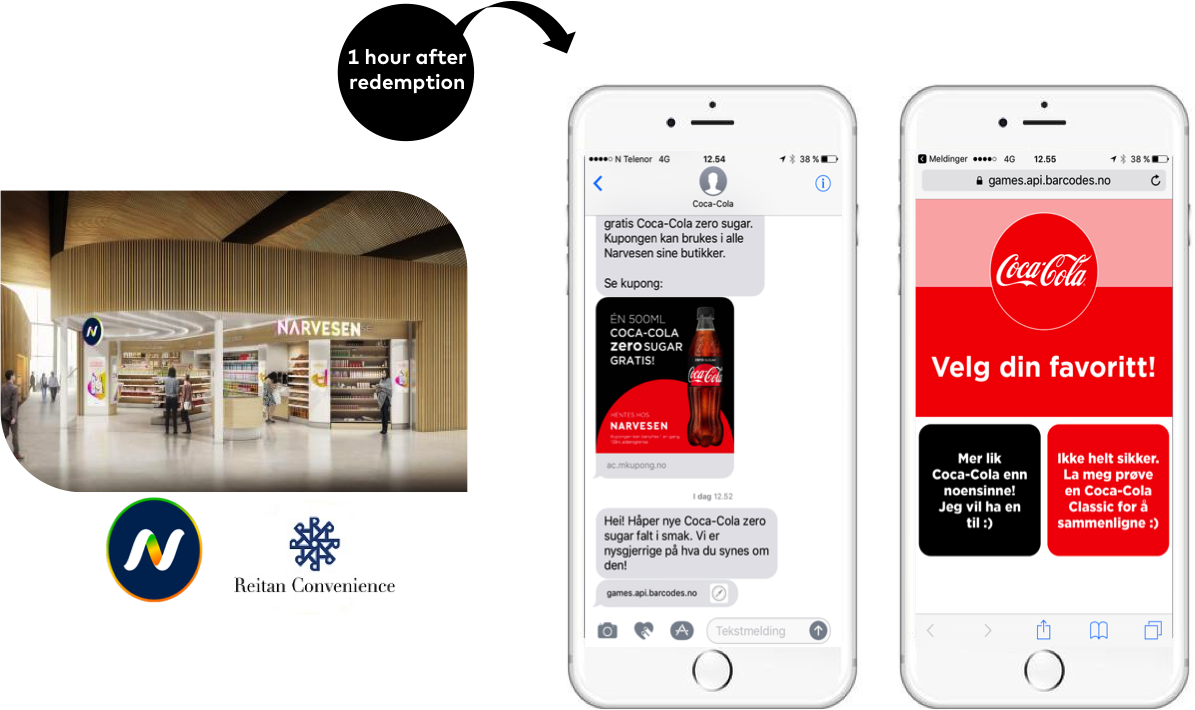 Consumers who clicked on the black box got another Coca-Cola zero sugar coupon and the journey ended there – with two samples. Consumers that clicked on the red box received a new SMS with the communication “Not sure? Try a Coca-Cola Classic to compare :)”.

Consumers redeemed their coupon in a Narvesen store close to them. 1 hour after the redemption they got another SMS from Coca-Cola! The SMS text said “Did you now taste how similar Coca-Cola zero sugar is the original?” By clicking on the link the consumer is led to a landing page where they are allowed to make a choice. The black clickable box said “They taste the same for sure!” and the red clickable box said “Nope. I am still not convinced.” 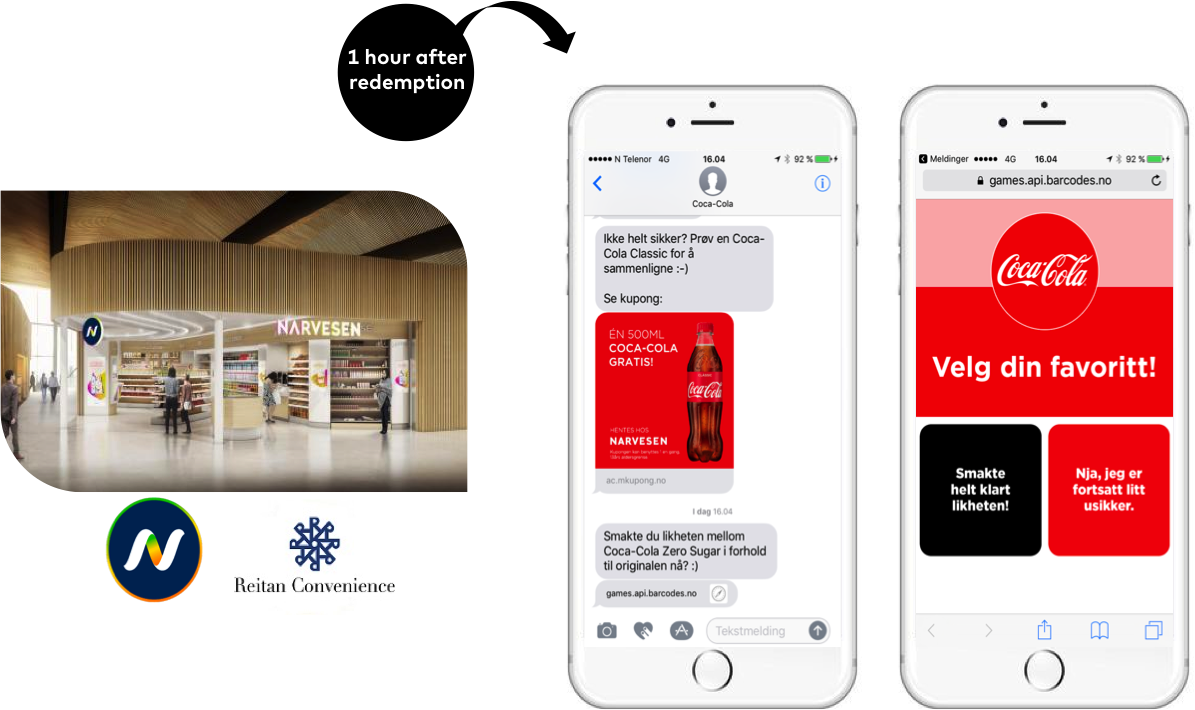 The campaign got international interest and Coca-Cola Company shared the campaign success story on coca-cola-company.com. With reference to this article;

The activation was an instant hit, generating 218,000 impressions, with an engagement rate of 14.3 percent (the average engagement rate benchmark is 8 percent). More than 40 percent of Tinder users in Norway clicked through, which is six times the average click through rate.

Coca-Cola Norway issued more than 22,000 digital coupons, with more than half redeeming them for a free bottle. In recognition of these impressive results, Coca-Cola Norway was recognised recently with a Bronze DAN award for the innovative Tinder activation, which was led by Coca-Cola Brand Manager Line Sjotun.

“We are proud of the team for this brave innovative move, which generated such impressive redemption rates,” said Karen Huffman, general manager, Coca-Cola Norway. “The team has once again shown that it can come up with relevant activations that truly connect our target audience, getting our new Coca-Cola Zero Sugar into the hands of countless consumers.”

The campaign was set up by Coca-Cola in our partner-dashboard after Narvesen had set up the two coupons which were available for Coca-Cola Company for this campaign (Coca-Cola zero sugar and Coca-Cola Classic). Carat made the media placements and integrated the landing page with our Coupon API. During the campaign Coca-Cola and Carat could follow the real-time stats of the campaign.