Starbucks Rewards is the extra-ordinary success story of a loyalty programme that now boasts over 16 million members, credited with driving 40 percent of its sales in the U.S. and which has grown more than 25 percent over the last two years alone.

This month (April 2019), Starbucks is further enhancing its rewards program “to give members even more flexibility and choice”, so this article describes exactly how the world’s biggest coffee chain will be recognising and rewarding its customers in 2019 and beyond.

In its most recent quarterly fiscal results published, Starbucks achieved net revenues of $6.6 billion globally with a total store count of 29,865 across seventy-eight markets. In a year when its stock price reached a record high, we’ve noticed some new and interesting ideas emerging in its business strategy as well as the ongoing evolution of its loyalty strategy. Here are some of the ideas that impressed us in the company’s AGM last week: 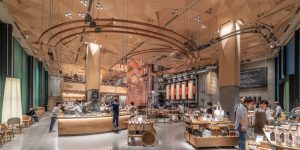 The Starbucks Rewards programme was first launched a decade ago in 2009, and like most successful loyalty programmes, the mechanics of the programme are fairly simple.

A key structural change was made about three years ago to the programme, awarding points (which they call ‘Stars’) on customer spend rather than on individual transactions as previously. Last week’s press release announced the elimination of the previous delay to earn Stars, which had required customers to earn gold card status first to qualify for them. The new programme’s mechanics commencing next month are as follows: 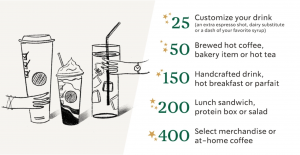 Starbucks Rewards are available from just 25 Stars as part of its 2019 enhancements. 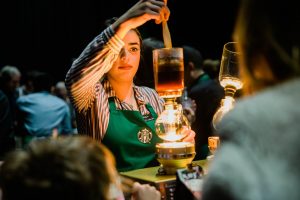 A Starbucks Barista in Action

Alongside the traditional earn and burn structure of the programme, Starbucks Rewards offers some real service benefits that reduce friction – an essential element to any successful loyalty strategy.

The key favourite with customers is Mobile Order and Pay – an option allowing members to pre-order and pre-pay their drink in key markets such as the US, Canada, UK and Ireland. Mobile pre-orders via the Rewards app now represent an incredible 11% of U.S. company-operated transactions, with mobile payment overall reaching 30%! The combination of customers willingness to pre-pay on gift cards, along with the outstanding ‘jump-the-line’ benefits have achieved unprecedented success and ‘mountains of cash’, according to this aptly named article – The Bank of Starbucks.

In their most recent and largest ever annual investor meeting, Starbucks CEO Kevin Johnson highlighted plans to continue to modernise the Starbucks experience with a focus on three key areas: “convenience, comfort and connection”, along with a $100 million investment in innovation and “new retail.” The company is adamant that this approach is not just a “furniture or a new renovation strategy” but rather a commitment to listen to some of its 100 million customers each week to prepare for the future.

CNN quotes Johnson in a recent quarterly earnings call describing Starbucks Rewards as “a powerful enabler of loyalty”  so our hope is that these learnings will prove insightful and inspiring as you plan your own digital loyalty strategies in convenience retail worldwide.

If, like Starbucks, you are focused on truly engaging your customers and you want to build a digital loyalty program using innovative ideas like those that makes up the Starbucks Rewards program, please contact us. 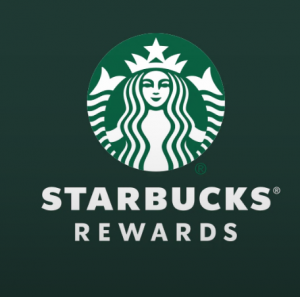