Asia is home to seventeen megacities – more than any other continent on earth so when it comes to innovation in urban convenience retail, this region is experimenting like nowhere else on earth. We’ve previously discussed the emergence of staffless stores in the USA, China and Indonesia, so along with some exciting new stories from those countries, in this article we also review some of the latest ideas from South Korea and Japan that are designed to save time for customers and reduce the need for staff in convenience stores.

We’ll start with the most startling.

Rather than ordering from your local store, now you can order the whole store – right to your front door.

Two remarkably similar concepts have emerged separately in Shanghai and California each claiming to be “first”. With both concepts, instead of you driving to the grocery store, the grocery store actually drives itself to you. Simply “order a store” from an app in the same way you’d order an Uber, anytime day or night, and the mobile store that arrives is nothing short of remarkable. A self-driving, staff-less, entirely self-service grocery store.

Best explained by video as below, the Shangai-based version is entitled the “Moby Mart project” and is the result of collaboration between a Swedish mobile organic cafe startup Wheelys, a tech company Himalafy and China’s Hefei University of Technology. Beta trials of Moby Mart have been in operation for over six months, and this video shows exactly how mobile and accessible the units are. Most importantly, with six months of testing already completed and delivering “highly promising results”, these mobile convenience stores claim to have a higher turnover (and lower operational costs) than a traditional brick and mortar store the same size would generate. 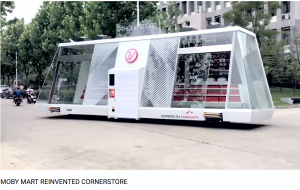 First unveiled at CES 2018  (“the world’s gathering place …. for consumer electronics”), “Robomart” is the California-based company offering a similar highly innovative solution – but mainly focused on fresh food. Based on the dual insight that online grocery spend is set to grow more than ten times faster than offline spend, and that the eCommerce model for the grocery industry hasn’t yet been unable to solve it’s single biggest problem (that customers simply don’t trust anyone else to choose their fruit and vegetables), RoboMart decided to bring fresh fruit and vegetables to your front door! Beautifully sleek in design, the company’s model is to build the units as unbranded vehicles that large retailers can brand as they choose in order to test and trial in relevant markets at relatively low cost.

Both Moby Mart and Robomart boast twenty-four/seven availability of their stores – so they are more accessible than many of the latest digital stores such as Amazon Go which typically operates from 7am to 9pm. They face plenty of hurdles before becoming mainstream – such as the legal infrastructure and licensing to support driverless vehicles – but there are clearly some locations worldwide where these mobile units offer a cost-effective and convenient grocery shopping solution to time-poor customers. 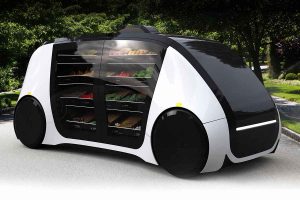 Self-service check-outs have been operational globally now for some years, however the robotics development office of Panasonic in Japan believes that it’s latest version of this technology could drive “a revolution in productivity”.

Using RFID tagging, this fully automated robot check-out bags and packs the produce ready for customers to leave quickly as soon as they’ve paid. Known as “Regi Robot“, the 2016 trials produced promising results including improved store traffic and an increase in customers choosing to use the self-service robot in the test store, particularly on repeat visits. Further enhancements since these initial trials include the ability for customers to place purchased products directly in their own bags from the shelves and leave. Again using RFID tags on products, this approach promises the ability for customers to simply walk-out of the store when they’ve chosen their products, allowing the exit scanners to simply scan the products taken (within the customer’s shopping bag) and process the payment. 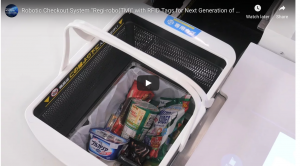 While facial recognition and the concept of “smile to pay’ has already been implemented by Alibaba in a variety of quick service restaurants and convenience retailers in Asia, 7-Eleven is the company leading the convenience world in the use of hand-pay technology. Following the announcement of the unmanned X-store concept in Taiwan in January this year, their Korean parent company – retail giant Lotte – unveiled a robot named “Veny” which automatically takes payment when a customer places their hand on the scanner. It has been described as “the symbol of 7-Eleven’s digital revolution” and works by scanning the veins in the customer’s hand to identify them and process payment. 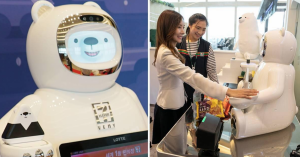 While not a roaming store, a fully-automated staff-less convenience concept has also been trialled in Shanghai by the French International Retailer Group Auchan SA. Originally called “Bingobox“, these kiosks are built in shipping containers and stock just 500 products. They use QR code scanners to control entry and exit and offer both WeChat and Alipay payment options. Click here to see the full customer experience in action, which operates now under the brand name Auchan Minute. These new format kiosks offer an interesting option in places where a new store is needed (and space and technology permits).

Other disruptors however such as Standard Cognition have announced even more exciting ideas for existing stores who are increasingly concerned about competition from Amazon Go and their recent announcement to scale their store numbers up to about 3,000 in the US in the next few years. While headquartered in Silicon Valley, this company is running pilots overseas in countries with even greater need for this solution such as Japan which is suffering from a chronic shortage of staff across all sectors with 1.2 million jobs left un-filled in 2017, proving a major barrier to growth! 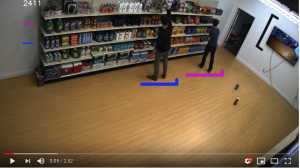 While still at the very early stages of their pilot/trials, companies like this using artificial intelligence to build such powerful propositions as “Walk in, take things, walk out’ will inevitably win the hearts and minds of customers and store operators alike.

The Next Retail Revolution

While consumers continue to tolerate whatever process their local convenience store requires, there is equally a clear understanding in the industry that one of greatest challenges we face currently is to effectively remove every possible point of friction. So whatever solutions emerge, once they are adopted at scale, they will truly drive “the next retail revolution”. 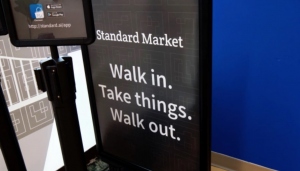 Standard Cognition‘s Compelling Proposition.
About Us: