WHO WILL WIN TODAY`S MATCH?

Coca-Cola Company engaged consumers on mobile together with Reitan Convenience within the context of EURO 2016. As one of the main sponsors Coca-Cola Company invested heavily in the EURO championship.

The “vote and win” campaign allowed app users to vote on which team they believed would win today´s football match. Every day Narvesen´s app users could vote. If you voted, immediately you were rewarded with a unique, single-use Coke for 15,- coupon (½ price). After the match ended everyone that voted correctly were rewarded with another Coke coupon – an even better deal – Coke for 10,-.

“We wanted to find a way to utilise this asset in the best possible way to engage with Norwegian consumers.” says Knut Anders Thorset – Senior Manager Digital Sales & Marketing with Coca-Cola European Partners Norway. “Narvesen, with their national coverage and highly engaged app user base, was the optimal retail partner for us. Together we succeeded in creating an activity that was right for the channel and that engaged broadly day after day – over a 1 month period!”

“Who will win today´s match?” – Vote and you will receive a unique, single-use Coke reward. 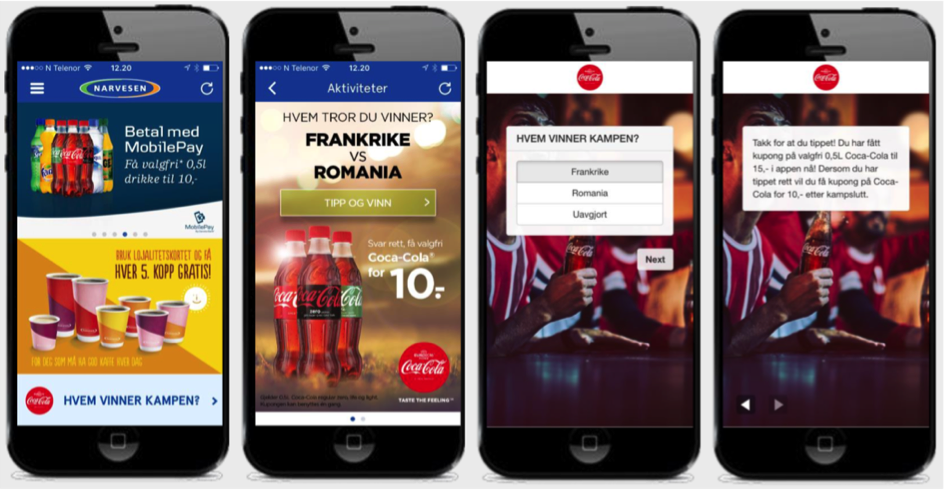 Here is your reward for voting. After match ends – if you voted correctly: Coke for 10,-!

In addition the app users could vote who they believed will be the two finalists. Coca-Cola looked at all votes and made a draw of lucky winners that got VIP passes together with a group of friends to watch the EURO 2016 final on a big screen festival in Oslo. The VIP treatment included free Coca-Cola drinks.

“Vote for the finalists – and win VIP tickets!

With this activity Coca-Cola somewhat transformed a couponing activity into something highly engaging and relevant in many consumers´ lives during these weeks.

“It was probably the element of gamification that made it successful” Knut Anders continues. “And the fact that it felt real-time. It was today´s match, you could vote up until the match starts, immediately after voting you got a reward and after the match – if you voted correctly – another reward. It was engaging for many consumers!”

Knut Anders elaborates: “We wanted to create a campaign that was not a sampling activity. Narvesen wanted traffic to store of paying customers. The deals had to be good, but not too good. We believed that if we succeeded to engage we would see rewards being redeemed. And this was what we experienced. We have a 16% redemption rate on the “thank you for voting” reward and a whopping 35% redemption rate on the “you voted correctly” reward. This tells us that there is some sort of psychological effect we´ve been able to drive. Consumers that have won the rewards probably feels an ownership to their rewards – maybe they feel it is more personal and something they´ve earned. And thus they have a strong desire to use it in-store.”

“Also, we achieved amazing results if we look at the number of app users that actually did the daily surveys in the app. An average of 35% of the daily app users participated. And many users voted day after day. We were able to keep the app users engaged over a long period. And we truly created an activity that helped Narvesen drive app openings”.

“We believe we have entertained the consumers with this campaign. We´ve created great moments and hopefully lasting memories with the Coca-Cola brand”  Knut Anders concludes.