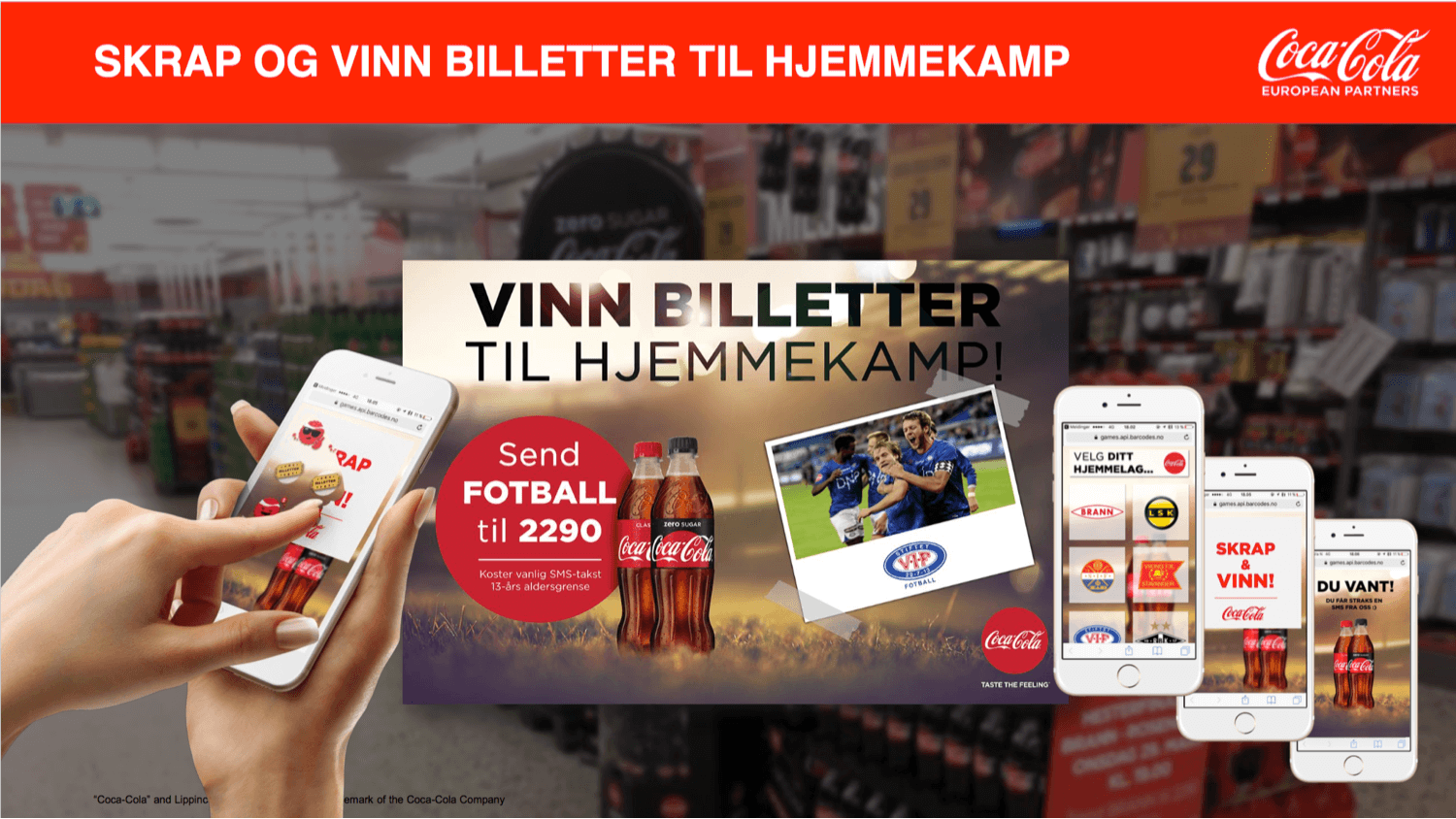 Coca-Cola connects with consumers on a local level offering them the chance to win tickets to their favourite football team´s next home match. With in-store collaterals in grocery and convenience stores nation-wide Coca-Cola is able to communicate consistently one national campaign at the same time as it is localised and focused on the local football club in each of the participating cities.

The mechanic is simple. Text Fotball to a short number (2290) and you will receive a SMS that allows you to select your club. Once selected you receive a digital scratch card where you have a chance to win tickets to the next home match. If you win you receive a unique coupon that you redeem with your local club. You can participate in the campaign once per day.

The shoppers are met with a localised communication in-store. The campaign is run nation-wide, but the communication is that you can win tickets to your local team´s home matches. 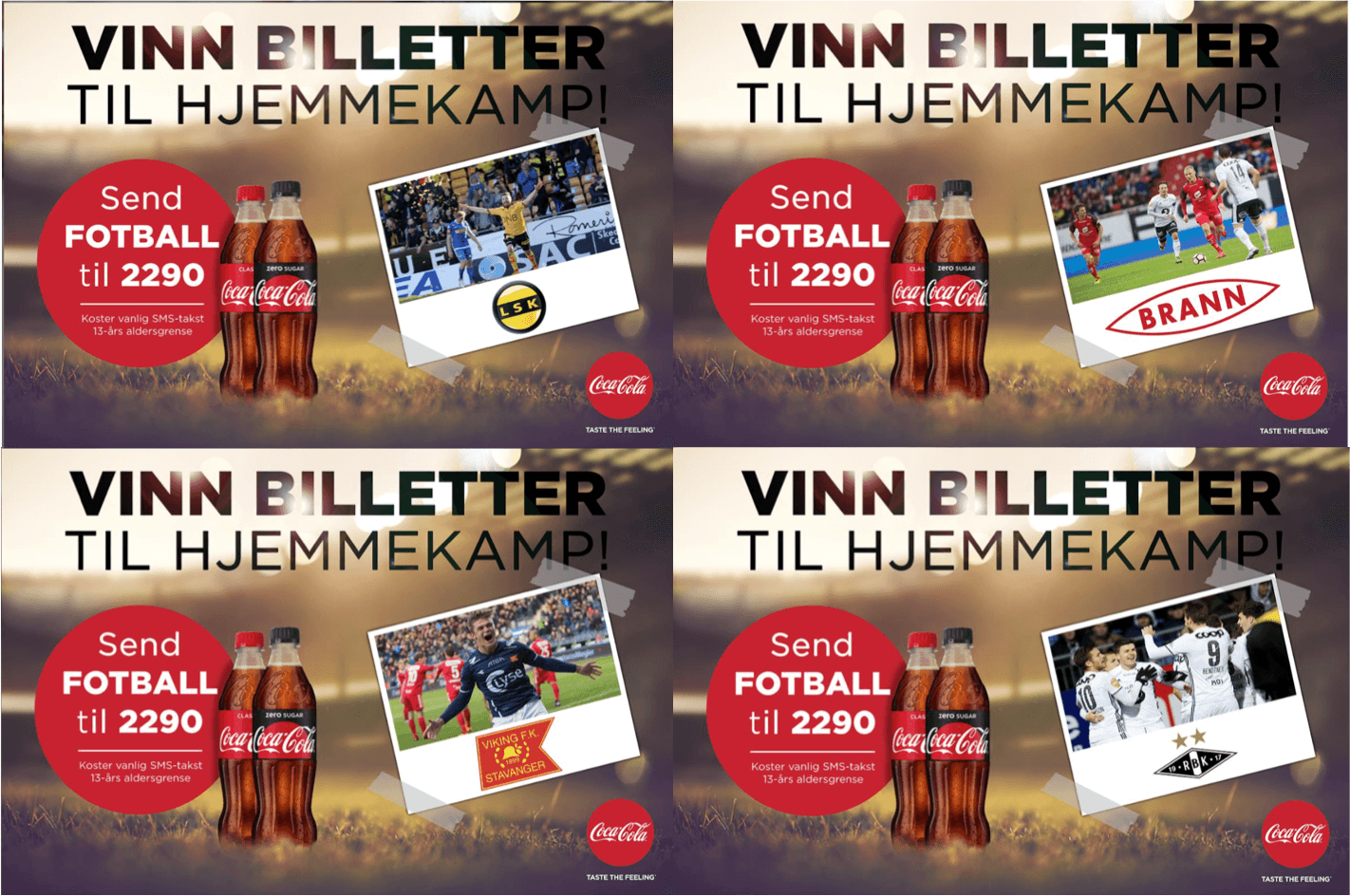 When the shopper texts fotball to 2290 she receives a SMS with link to choose her local team. Once chosen a new SMS is received with a digital scratch card. 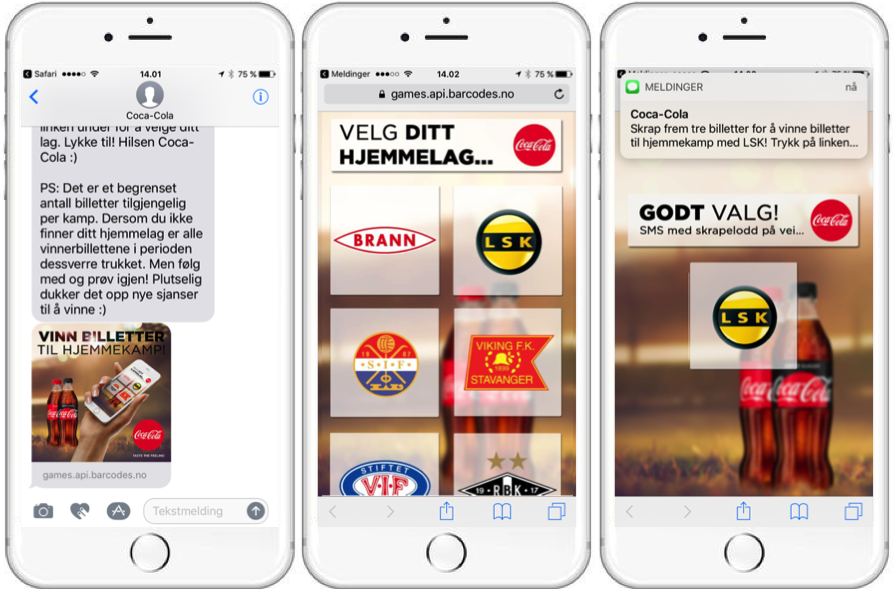 The shopper receives a digital scratch card. The scratch card is set up per local team with probability to win and limits set on available prizes. In this case the shopper do not win:

And in this case the shopper wins:

In parallell Coca-Cola is running the same campaign in the HoReCa channel. When consumers are buying a coke they get a printed, single-use unique code which they can validate on fotball.barcodes.no – a landing page set up for the campaign. When the unique code is entered the consumer can input her mobile number to receive the same initial SMS where she chooses her favourite (local) team. For each Coca-Cola purchase she gets a new code – and chance to win tickets.

The shopper input a unique code on fotball.barcodes.no and then her mobile number.

Coca-Cola is able to connect with the shoppers on a local level within a context which matters to lots of people. Football is fun and engaging. Especially when it comes to your local football team.

Coca-Cola have created a campaign mechanic that allows their sales team to propose activation of their products with in-store collaterals that local merchants can like. For Coca-Cola this means the possibility to get more space and ability to create awareness in retail stores across multiple channels like grocery, convenience and HoReCa.

The campaign is set up by Coca-Cola in Liquid Barcodes´self-service dashboard. Graphics are produced and then uploaded into the wizards select prize (choose your club) and scratch card. The tickets that are the possible prizes can either be based on Liquid Barcodes unique codes or they can be imported 3rd party codes. For the clubs that support online redemption of their own codes Liquid Barcodes import codes function is used. In the other cases web validation is used to support the process of redeeming prizes in a secure and controlled manner.

One of the entry points to the campaign is controlled with a codeword (text “Football” to 2290), and the other is by entering a unique code on a landing page. Liquid Barcodes set up the landing page for Coca-Cola and both the validation and distribution logic is provided by Liquid Barcodes.